We just had our Blog re-done and it has a new home.  Same great articles, videos and news just in a different location.

If you would like to receive the RSS Feed (Updates of our Blog) of our new Blog Click Here.

Any questions or comments please feel free to write me below in the comments section.

What a great video of Mambo the Green Cheek Conure playing basketball with his Mango Basketball hoop…..his way.

Thanks to Mambo’s Mom Laura V. for sending in this great picture.

This picture is so so cute.  These two guys are so adorable 🙂

Great Cockatoo Picture Outside a Store

I think these Cockatoos are staging a break-in for bird supplies (LOL). 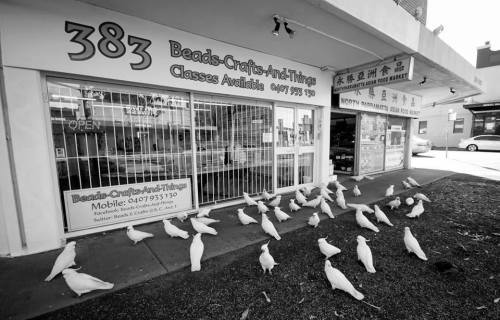 Tycho the Quaker Parrot on his FunTime Birdy Sophomore Playgym

Meet Tycho the Quaker Parrot enjoying his new Sophomore Playgym he received for Christmas. Here’s what Tycho’s Mom Megan S. had to say:

As promised, here is a picture of Tycho enjoying the FunTime Birdy Playgym he received for Christmas. I’m pretty sure he thought the humans finally came to their senses as he helped show them the best way to sit by a tree shredding wrapping paper. This was his first Christmas, and it turns out that he’s a natural at unwrapping presents.

After we assembled his playgym this morning, we set him on his perch and he immediately started throwing pellets all over the place. Then, having wreaked enough havoc, he started preening himself triumphantly atop his food dish.

With best wishes for the holiday season and a happy New Year, 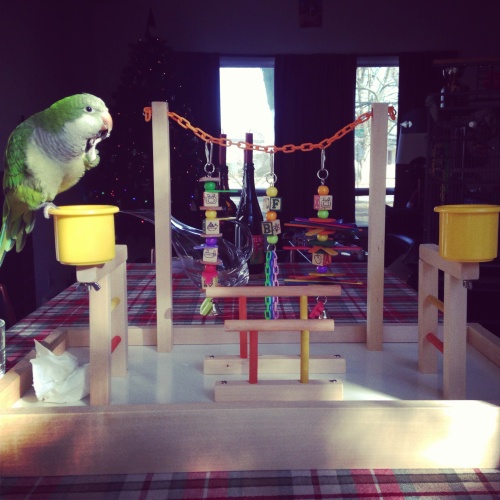 What a lovely picture of the Brooklyn New York Quaker Parrots enjoying the snow.  They all seem to be not affected by the cold weather and the snow…even the pigeons and sparrow are enjoying the fun.  LOL

Can you find the little Sparrow in the picture?

Check out our video below for some helpful gift ideas for your feathered friends this Holiday Season.

All items in video are available at funtimebirdy.com