I just love this little guy!!!!  He is such a great talker and just such a cutie.  There must be lots of laughs around his house.

Do you love to make your own bird toys for your birds or just want to add more parts to your already existing FunTime Birdy Bird Toys?  We just added Bird Parts to our website….so let the bird toy making begin!!!!  Over 40 different bird toy parts and more to come!!

Our Severe Macaw Buddy just turned 13 years old.   Check out his Birthday pictures below with his birthday cake (Farina…Cream of Wheat), his new birthday Bird Toy and his brand new A&E cage.   Happy Birthday Buddy!!!!  Mommy and Daddy love you so much!!!!! 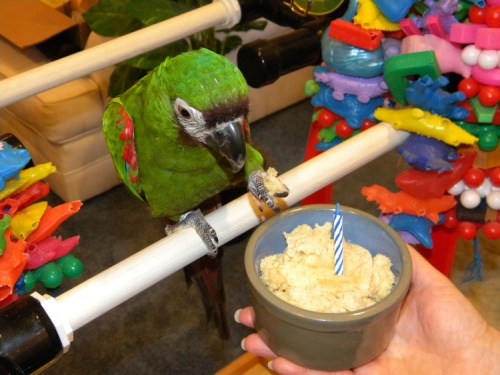 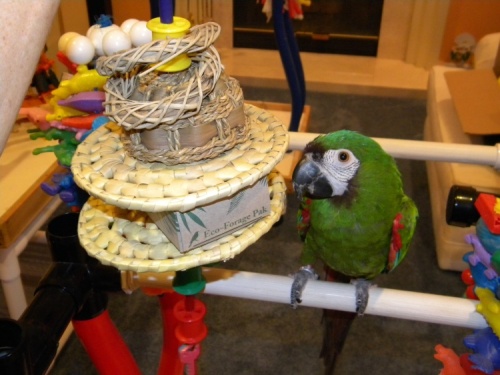 Our Best Seller Sale has begun at FunTime Birdy…….Come on in and check out what’s on sale!!!

Thousands of birds have flocked to a town in Australia, causing power cuts and a mess, its mayor says.  Around 2,000 pink galahs and white cockatoos have descended on Boulia, Queensland, as a result of the drought, Mayor Rick Britton said.  They have been perching on power lines, causing outages when they take off, he said.  The birds may not leave until November when rain is due, he said, so “people are going to have to live with it”.

Galahs are a type of pink-breasted cockatoo found in Australia.
Several shires in Queensland are suffering from drought due to low rainfall. Boulia is in the far west of the state.  “Because we’re in dry arid land we try to make our streets beautiful with lawns and trees – so the birds think that it’s a little secret haven in the drought,” Mr Britton told the BBC.

I think they are such a beautiful site to see much like the Quakers are here in the USA.

Posted in Parrots in the News

This Cockatoo can really dance.  Watch as he dances to Gangnam Style.  So talented!!!  Listen closely at the beginning you can hear his little feet as he hops….so cute!!!  Ann – FunTime Birdy

Give your Feathered Friend an Extra Special Hug Today

So, so true and so sad to think that there are birds out there that aren’t treasured and loved as much as they love us. Thanks to Gail P. for sending this to me.